EdTech Companies: Get Your Affairs in Order

Like it or not, politics is part of education.

When leaders in the EdTech space think about public relations, it is usually an afterthought and somewhat of a necessary evil. Because most EdTech CEOs and other leaders come from the technology side of the business, public relations aren’t a priority, and paying a few hundred dollars to put a press release on the wire a couple of times a year seems like a sufficient effort.

EdTech companies that take PR more seriously can have a decided leg up on their competition. The authority your company is given by being mentioned in major media outlets can be worth exponentially more than the salary of an internal communications pro or the retainer of an experienced agency.

However, there is one category of PR that nearly all EdTech companies overlook—public affairs. Public affairs is broadly considered to be building your company’s relationship with politicians and policy makers, but it can be much more than that. Building strong relationships for the long-term with various decision makers in the world of education can have a positive impact on your company and its bottom line for years to come. 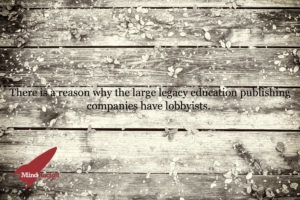 The standard approach to communicating with the market with a press release is not sufficient when you’re talking about policy changes, technology development, and funding. Public education is inherently political, and every state will surely implement education policy changes every time a new governor is elected, just like national policy changes with the election of a new presidential administration.

Most EdTech start-up company leaders don’t think about the importance of their voice and are missing out on opportunities. There is a reason why the large legacy education publishing companies have lobbyists. While a full-time team of lobbyists may be a stretch for an EdTech startup, take a page from their playbook and get your affairs in order.

COVID-19 & The Education Business Sector: Demonstrating Proof of Life During Avalanche of Unknowns
May 22, 2020
CoSN (Consortium for School Networking) and MindRocket Media Group Launch New Podcast Series to Support K-12 EdTech Leaders in the Digital Age
February 6, 2020
When Should You Ask for Seed Funding for Your EdTech Startup?
September 22, 2018
The Importance of a Personal Brand for the EdTech CEO
August 15, 2018
For EdTech Startup Success, Do Your Research
July 14, 2018
4 Critical Do’s and Don’ts When Starting an EdTech Company
May 26, 2018